In the second part of his series, our guest blogger, Bill Welsh, discusses his research on James C. Welsh’s brother-in-law, Edward Hunter, who was a miner poet and trade union activist. 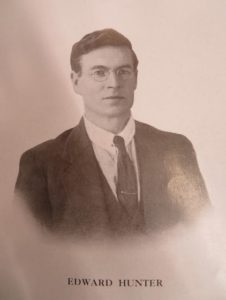 Edward Hunter was born in the village of Douglas, Lanarkshire, on 2 June 1885. His father was John Hunter, a coal miner, and his mother was Jessie Lammie. In 1900, the family moved to Douglas Water to work in the new mine which had been opened there by the Coltness Iron Co. Hunter started work in the coal mines at the age of 12. He was influenced at an early age by the socialism of James Keir Hardie and the Lanarkshire miners’ leader Bob Smillie and became a committed socialist.

In 1906, along with his brother-in-law, the miner, poet and author James C. Welsh, Hunter emigrated to New Zealand. According to Hunter’s entry in the New Zealand Dictionary of National Biography, the two men went to work in coalfields on the west coast of South Island. However, James Welsh became homesick and soon returned to Scotland. Hunter moved on to the Huntly coalfields in North Island and became active in the New Zealand trade union movement. He suffered serious back injuries in a mining accident in late 1912 and spent several months in hospital.

His activism in the union movement and his support for a general strike in New Zealand in 1913 led to him being arrested and charged with sedition. He was found guilty and sentenced to two years imprisonment, commuted to twelve months’ probation, on condition that he refrain from further seditious speeches or writing during the probation.

Hunter wrote prose and poetry under the pen name Billy Banjo, articulating the struggle of the miners in New Zealand. It’s tempting to associate Hunter’s soubriquet, Billy Banjo, with that of Banjo Paterson, the pen name of the Australian ‘bush’ poet and author, Andrew Paterson (1864-1941), also of Scottish descent, who was very popular around this time and was most famously the author of Waltzing Matilda. Many of Hunter’s poems and articles were written between 1906 and 1919 and published in newspapers and magazines, particularly The Maoriland Worker, the official newspaper of the New Zealand Federation of Labour. 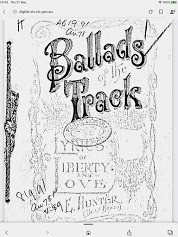 Some were later included in his book of songs and poems, Ballads of the Track, which was published in New Zealand in early 1919. The New Zealand Dictionary of National Biography indicates that Hunter was eventually blacklisted in the coalfields and thereafter adopted a more itinerant lifestyle, promoting the causes of various other working-class groups around New Zealand.

Edward Hunter returned to Scotland from New Zealand in September 1919, after the end of the First World War. His novel, The Road the Men Came Home, which tells the story of a young Scottish miner’s emigration to New Zealand and which contains much autobiographical information, was published in Glasgow in 1920. He returned to Douglas Water and once again became involved in trade unionism and socialist politics. 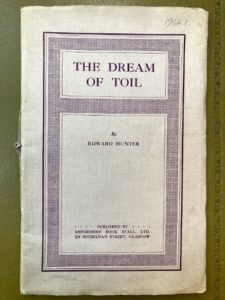 In 1922 The Dream of Toil was printed in Glasgow. It contains poems very much of a socialist leaning and some songs, music and lyrics, which he called May Day Lilts, with music by Robert Chalmers. In 1928 he wrote a play called The Disinherited, which was performed by a cast drawn from the local mining community of Douglas Water.  After a spell as a journalist, writing for some socialist newspapers, he was elected to Glasgow City Council, representing the Cowcaddens ward as a Labour member, eventually becoming deputy chairman of the council.  In 1946 he produced his final book of ‘Pictures, Music, Songs and Poems’ called When Sleeps the Tide.  It was published by Aird & Coghill of Glasgow and contains a selection of his poems and songs (music and lyrics) dating back over a number of years, including one written in New Zealand in the 1910s, a commemoration of a Welsh mining disaster in the 1920s and a tribute to the Lanarkshire miners’ leader, Bob Smillie, who died in 1940. Hunter represented the Cowcaddens ward of Glasgow for over twenty years, retiring just before his death in December 1959. 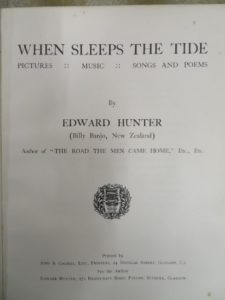 In addition to numerous poems, a play and newspaper articles, many of which were printed in New Zealand, Edward Hunter’s published works include:

Ballads of the Track: Songs and Poems (New Zealand,1919)

The glen is ours! The muir is ours!
The sunshine and sweet song.
We breathe at last among the flow’rs
When summer days are long.
For you we’ve starv’d to build your wealth
You masters gave but scorn;
Ours was the toil, the broken health
The bodies bruised and torn.

The glen is ours! The muir is ours!
The fields and muirs are wide.
‘Tis long since we have seen the flowers
Bloom sweetly side by side.
And we will dice the bairnies’ glee
Against the gold you crave.
We dare your lash, we will be free,
And scorn to be your slave.

THE PITS ARE YOURS! Work them alone
And live as we have done:
Come from your mansion and your throne
And leave the glen and sun!
Put by your tinsel and your show
Ere yet we call out “quits”
You! God’s great men, go down below
And work YOUR bloody pits.